skip to main | skip to sidebar

Posted by mycompass at 2:27 PM No comments:

Trumpet solo by Jorge Vistel, recorded May 2006 at the Hotel Ambos Mundos, in Havana Cuba. In the early 1930's Ernest Hemingway stayed in room 511 and wrote the first chapter of, "For Whom The Bell Tolls."

Eliades Ochos, lead singer and guitarist of the Buena Vista Social Club plays in Tunisia at the Tabarka International Jazz Festival in the summer of 2004.

The Buena Vista Social Club was a members club in Havana, Cuba that held dances and musical activities, becoming a popular location for musicians to meet and play during the 1940s. In the 1990s, nearly 50 years after the club was closed, it inspired a recording made by Cuban musician Juan de Marcos González and American guitarist Ry Cooder with traditional Cuban musicians, some of whom were veterans who had performed at the club during the height of its popularity.

The recording, named Buena Vista Social Club after the Havana institution, became an international success, and the ensemble was encouraged to perform with a full line-up in Amsterdam in 1998. German director Wim Wenders captured the performance on film, followed by a second concert in Carnegie Hall, New York City for a documentary that included interviews with the musicians conducted in Havana. Wenders's film, also called Buena Vista Social Club, was released to critical acclaim, receiving an Academy Award nomination for Best Documentary feature and winning numerous accolades including Best Documentary at the European Film Awards.

The success of both the album and film sparked a revival of international interest in traditional Cuban music and Latin American music in general. Some of the Cuban performers later released well-received solo albums and recorded collaborations with international stars from different musical genres.

The "Buena Vista Social Club" name became an umbrella term to describe these performances and releases, and has been likened to a brand label that encapsulates Cuba's "musical golden age" between the 1930s and 1950s.

The new success was fleeting for the most recognizable artists in the ensemble: Compay Segundo, Rubén González, and Ibrahim Ferrer, who died at the ages of ninety-five, eighty-four, and seventy-eight respectively; Segundo and González in 2003, then Ferrer in 2005.

Rockit 88 Band recorded on July 25, 2010 at the Beaches International Jazz Festival. The song "Sweet Sugar Cane" is written and composed by band leader Bill King from their new album of the same title.

King describes: When I started writing for this album I was thinking the blues - then the words began to dictate a broader picture. I can't escape my roots the music that played in the background of my youth. Redd Stewart and Pee Wee King were the music icons of Louisville, Kentucky. Together they penned the greatest song of all 'Tennessee Waltz.' To this day the melody clings to the bones like the best travel companion on earth. I write, I sing and play according to the rhythms and harmonies of a land once unspoiled by strip malls and fast food outlets - the South! 'You can smell the sweet grass burn while the raven sings his southland song.'

'Sweet Sugar Cane' evolved from my many excursions to Barbados over the years and the long drives in the countryside where the sweet smell of cane cooling under a long day under the blistering sun overwhelms the senses. I remember reading Austin Clarke's 'The Polished Hoe' and the poetic descriptions of life in and around the cane fields. It's back breaking work yet the fields are refuge for lovers lost in passion who hide away at night amongst the broad stalks and slicing leaves. These fields existed in greater numbers in the southern states before sugar farming was outsourced. Florida still has the same vibe going for it.

Guitarist Neil Chapman and drummer Jim Casson and I came together to basically play a bit of the blues and see where all of this would lead. Once funding was in place it became clear an opportunity to write new music free of cover songs or common pop expectations presented itself. Neil and I went our separate ways and spent a couple months writing and re-writing. At each rehearsal a new song or songs were played until a unifying sound presented itself.

Through this decade Neil and I have recorded three Saturday Nite Fish Fry albums and now two Rockit 88 sides. It's always about the blues yet a few miles in a variety of directions a place where country and southern rock intersect.

Folks in Louisiana holding their breath 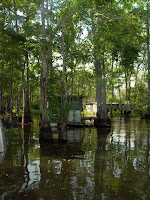 Just returned from Louisiana where I spent time talking to folks around St. Tammany Parish. Life isn't easy here especially now. Faced with arduous hardships and many a hurricane that have left a path of destruction, these people for the most part, have a strong resilience toward disasters and seem to dust themselves off each time they face one.

Read my story in the Philadelphia Inquirer on how they are now holding their breath over the BP oil spill.
Posted by mycompass at 8:28 AM No comments:

How to avoid a holiday from hell

Don't we all hate holidays from hell? A leading financial publication recently interviewed me on this important topic. Find out what I said.

Read more
Posted by mycompass at 9:15 AM No comments:

What's the future of Louisiana's shrimping and tourism industries? 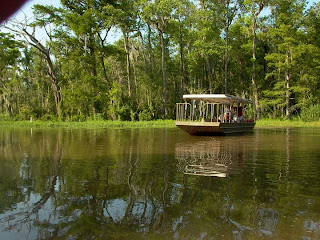 Darren Frickey, a fifth-generation shrimper, has been out all night fishing and is now preparing for his umpteenth shrimping mission before things get real bad. Thing is he says, scooping up a handful of medium brown shrimps known as “golden boys,” this year’s yield has never been better.

“There’s so much shrimp out in those waters. I was real busy before the oil spill hit the Gulf. Now we’re trying to catch as much shrimp as we can before the oil comes,” he explains aboard his boat, the Halania Juna, docked at the Rigolets Marina about the shrimp surge in Lake Borgne.

The big question is how long will the shrimping last?

Folks along Louisiana’s Northshore in St. Tammany Parish are nervous. A 45-minute drive north from New Orleans along the Causeway Bridge, this largely bedroom community of the Big Easy ain’t so easy these days with the imminent threat of oil spilling into Lake Pontchartrain, the US’s second largest saltwater lake.

Posted by mycompass at 7:38 AM No comments: